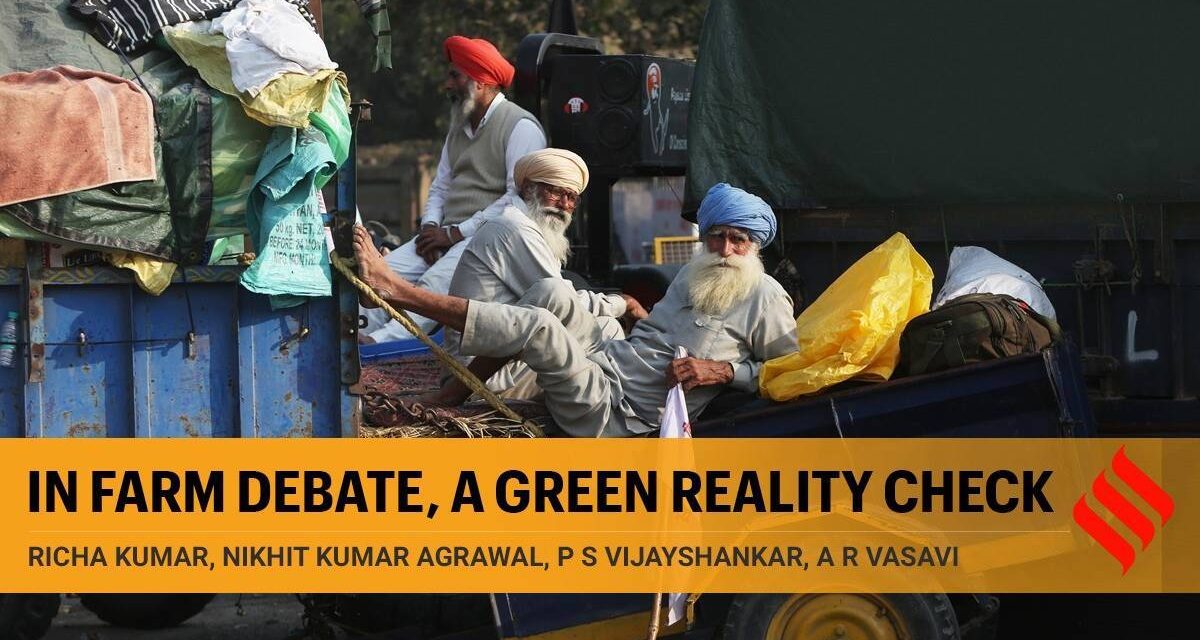 Originally Published in The Indian Express.

Proponents of the three new farm laws have claimed that they will engender competition in agricultural markets and will give farmers a choice to sell wherever they like. The opponents of these laws, including many farmer groups, have forcefully argued that these policies will strangle the mandi system, spell the end of the Minimum Support Price (MSP), and lead to oligopolistic buying by large agribusinesses.

These debates, however, have remained restricted to the realm of agricultural marketing and the economics of livelihoods. They miss the fundamental reality of today’s times — that the current agrarian impasse reflects the fatigue of dominant approaches to agriculture, which assumes growth is limitless and resources are inexhaustible. Added to this is India’s agrarian structure, closely aligned with the caste structure, thereby marking the whole system with tremendous inequality in access to natural resources, capital and markets. A combination of all these is reflected in the multiple ecological, economic and social crises that beset rural India. To tackle all these challenges, we require alternative policies that address these foundational deficits and go beyond the dominant paradigm of high-external-input, high-cost agriculture.

The recognition that agriculture is embedded in nature and that the agrarian economy is constrained by the limits imposed by nature and by social rules is fundamental to making policies that can benefit farmers. Instead of a resource-based approach, the need is to develop a relationship-based approach towards the environment. The challenges towards adopting such an approach have ecological, sociocultural, political, techno-scientific and economic dimensions. Reducing this complex maze to either economic or techno-scientific or a combination of both is highly problematic. This reductionism is the primary reason we are now suffering the consequences of runaway climate change, to which the contribution of modern agriculture is significant.

Moreover, the destruction of our rich agricultural biodiversity, the growing toxicity of our air, water and soils, the over-extraction of groundwater and growth in pesticide resistance have led to farming becoming a high-risk venture, in addition to threatening human health. The link between factory farming of animals and the growth of zoonotic diseases is now well-known, especially after the COVID-19 outbreak.

Drawing upon a paradigm of the conquest of nature, modern agricultural practices emphasise maximising crop yields, farm incomes and global competitiveness. The single-minded pursuit of such goals has remade our land and farms into monocultures. Success means ensuring a single crop accesses all the nutrients and everything else is killed as pests or weeds. This means competing with and controlling nature, which, in contrast, survives (and thrives) on the principles of biodiversity. This has led to increasing doses of chemical fertilisers and pesticides, causing widespread soil degradation. The extent of degraded land in India is 12 crore hectares or about 38 per cent of our total geographical area.

While modern science and technology have made monoculture farms possible, it is the economics of modern supply chains that has accelerated their growth. For example, crop varieties of wheat (and later rice), highly responsive to chemical fertilisers and water, along with the advent of mechanisation and agrochemicals, made wheat and paddy monoculture farms possible in the 1960s. But the Green Revolution did not take off until the Indian government provided input subsidies and set up the MSP-based procurement regime for these two crops. Similarly, it is the economics of soybean meal as cattle-feed that has driven the growth of soybean monoculture farms around the world while the demand for sweeteners and biofuels made from corn and sugarcane have promoted their fast growth.

Unfortunately, the scientific paradigm of single-crop productivity has promoted an agricultural system with ecologically unsustainable cropping patterns. It has contributed significantly to climate emissions, and threatened farmer livelihoods and the natural resource base they depend upon. Moreover, it has also distorted our food consumption patterns, replacing nutritious millets with polished rice and wheat and negatively affected our nutritional security.

In attempting to offer a new deal to farmers, do the new farm laws recognise or address any of these fundamental concerns? Do the farmer organisations pressing for continued MSPs and subsidies recognise the in-built reproduction of these problems in this model?

Sadly, both sides have continued to ignore the broader ecological and social contexts in which agriculture is embedded. By promoting greater corporatisation of agriculture (through contract farming, higher stocking limits and private marketplaces), the laws will, in all probability, accelerate the growth of long supply chains of monoculture commodities. An expanded MSP regime might support the livelihoods of farmers growing the crops being procured and who have the wherewithal to access the mandi/procurement centres, but it will necessarily be limited by the government’s ability to purchase. Moreover, guaranteed procurement in the past has incentivised monoculture farming, with huge ecological and social costs.

This is not to ignore the critical importance of a system of public procurement to promote less favoured crops like millets and pulses. In either case, the pressing problems of natural resource exhaustion, adverse climate impacts, unstable markets and undemocratic governments will eventually force farmers off the monoculture treadmill as farming becomes riskier and more expensive with a continuously degrading natural resource base.

If we truly want to ensure the livelihoods of our farmers and provide safe, healthy, nutritious food for our consumers, it is imperative to make policies that go beyond the productivity trope and populist posturing. This can begin with the salient recognition that any sound economic and techno-scientific model must have agroecology and equity at the core and, must indeed, be guided by them.

Steps of a Famine

The Best of Times, The Worst of Times – Mihir Shah