Does Patch work really work for farming and farmers?

Decentralising processes for planning, implementation and co-creation of knowledge at village level

I would like to present some ideas, gathered over the past two decades while interacting informally with farmers, related to the confusion that farmers confront while engaging in farming. Some of those challenges include:

Numerous schemes are being carried out by central and state governments, many quasi-government bodies and international agencies, non-governmental organisations, agriculture research (various ICAR bodies), extension (KVKs) and education institutions (universities and institutions), agriculture inputs /output marketing agencies, CSR bodies and financial institutions. Each agency pursues its own agenda and the farmer is lost in the labyrinth of projects / schemes / funding pattern / funding period and so on. And often she/he discovers that many of these programmes are inappropriate or irrelevant to the daily drudgery that they face in their life.

Often before each elections, schemes, that are hurriedly drafted and with little relevance to the agriculture sector, are announced and these only aggravate the farmers’ confusion and do not solve their problems in a holistic way. A typical example is Odisha government’s pre-election announcement of Kalia Jojana or promises of loan waiver. The list of such schemes that are poorly designed with in-built biases is long. Here are a few examples:

The government’s announcement to increase subsidy on chemical fertilizer causes mindless use of such fertilisers and harms the environment in general and soil health in particular. Another scheme to promote organic farming under Paramparagat Krishi Vikash Yojana (PKVY) not only increases farmers’ confusion, it also indicates lack of firm direction. A mismatch between demand and supply of say, potato, may result in distress sale or sudden spurt in potato price prompting the launching of a ‘Potato Mission’ without a long term policy to address the issue by strengthening cold storage infrastructure, food processing technology or determining appropriate acreage to put under potato. Soon after the crisis is over the whole issue is forgotten. And in this case, the Potato Mission went into cold storage. Another instance of policy paralysis is about onion. An adverse weather condition affecting onion crop in Maharashtra causes skyrocketing of onion price in the state resulting in widespread resentment among the consumers while onion farmers of western Odisha are forced to sell their produce at an unremunerative price in the absence of any cold storage infrastructure. While cashew plantations are being promoted by different agencies, like Soil Conservation wing of Agriculture Department, its processing is not promoted by the Industries Department or by the Department of MSME. So, raw cashew nut is transported out of Odisha to the neighbouring states for processing and sold back in Odisha at a higher price. Similarly, cold storages or processing industries are promoted by different departments whereas tomato cultivation is promoted by another resulting in shortage or glut in the markets, forcing farmers to go for distress sales. Farmers are persuaded to divert their uplands to grow cashew to export to earn foreign exchange instead of growing various types of nutritionally rich pulses. Subsequently the country is importing pulses/dal, loaded with chemicals, from other countries.

Farmers using GM crops or agrotoxins / synthetic chemicals are neither required to inform consumers about that and nor are they required to have special certification. But, farmers producing crops without using agrotoxins have to go through complicated and expensive processes to get certification as ‘organic produce’, thereby unnecessarily raising prices of organic products and restricting its demand to a niche market only.

If one buys a tractor, subsidy is available, but no subsidy is there if one buys a bullock-drawn cart or pair of bullocks which do not pollute air or do not use non-renewable resources.

One can buy chemical fertilizer at subsidised rate, but no subsidy is available if one uses farm yard manure or the oil cake or tank silt which is available in his or her locality for increasing soil fertility. In case of subsidy for the organic farmers under PKVY scheme, a limit is laid down on the incentive available to the farmer whereas there is no limit either on acreage or on amount of subsidized fertilizer a farmer can use. So, the richer a farmer is, the more fertilizer subsidy she/he avails. This makes the whole subsidy structure regressive. It took more than half a century of concerted efforts and huge investments to persuade farmers to adopt chemical agriculture. But now under PKVY, it is assumed that farmers can make a transition from chemical agriculture to organic farming with patchy and half-hearted efforts and incentives that are limited to three years.

The entire agriculture establishment still firmly holds the view that chemical agriculture is the only way to feed our billion plus people and any shift to organic farming would lead to a drastic decline in output and to mass starvation. The agriculture academia and its administrative and extension sectors repeat parrot-like the above mantra. No wonder their sustained efforts have made farmers internalize this. Hardly any investment is made in the field of organic farming research, practice and promotion.

One can easily sell HYV or hybrid rice in the mandi, but not the indigenous rice varieties. Indigenous seeds are not available at government-supported dealers, but HYVs are. Hardly any government official writes a prescription based on locally available materials for management of pests and diseases, but one finds a lot of purchased biocides (herbicides, insecticides, pesticides, nematocides, fungicides and so on) being prescribed and provided at subsidised rates. If one puts his / her own efforts to create an irrigation facility, then she / he does not get any subsidy or incentive, but only if she / he borrows from a bank under a scheme, then she / he can avail subsidy. Sometimes, in a whole taluq/block, incentives are given to about ten farmers for construction of vermicompost tanks, but not to all those who want it. Similarly, the Horticulture Department provides HDPE kit for vermicompost, but no training is given and no earth worms are supplied. Labourers are supposed to remove weeds but are not provided appropriate equipment to remove weeds. Instead, weedicides are promoted. The list grows long. The other issue that has been observed is that a farmer is required to make several rounds of visits to different offices, meet different people seek solutions. This not only consumes their precious time, but also drains them of their limited resources and often causes exhaustion and frustration. Dalals and agents have a field day while farmers are being fleeced. So, sometimes they give up, sometimes they decide not to run to offices, or sometimes they have to bribe to get things done. For a woman or tribal non-literate farmer, these problems get compounded.

Let me mention a few cases. Farmers have to run to the Revenue Department for land records related problem or if their crop is damaged or destroyed due to some disaster; they have to run to various kinds of Irrigation Department (such as Minor Irrigation, Lift Irrigation, Water Resources or Watershed Mission) or Agriculture Department (individual open well or bore well) according to size and nature of their irrigation infrastructure. They have to run to the Electricity / Energy Company or Department if they use electricity for irrigation, or Renewable Energy Development Agency if they use Solar power for irrigation; they have to deal with Area Development Banks or Cooperative Societies or SHGs or Microfinance groups if they have to borrow, insurance companies for crop insurance or animal insurance, deal with mandis to sell their rice at MSP.

The governments are so industry intoxicated that all sops including single-window facility are offered to attract industrialists or entrepreneurs who are better endowed in terms of information, income and connections with powers that be. On the other hand a farmer, who is much less literate and resource-starved and severely time constrained, requires negotiating with various departments and agencies to get even small things done. It is of course true that better off and resource rich farmers are able to corner much of the incentives and benefits offered by the government / agencies. The whole structure seems to be arrayed against small, marginal farmers, women and tribal farmers. The agriculture sector provides refuge to the largest segment of population, but it has been experiencing continuous decline in public investment. Despite myriads of schemes and claims of substantial rise in yield and farmers’ income (Odisha government has recently claimed that there has been 7 times increase in farmers’ income in last 13 years!), there is also a steady rise in farmers’ suicide and incidences of malnutrition and hunger. It is also difficult to reconcile the contradictions of a rise in farmers’ income and the mass exodus of people from farming. Over the years, farmers have saved seeds, have sophisticated knowledge systems and experiences, and have fed the nation. But they have been substantially ignored or neglected creating a feeling of inferiority among them and a superiority complex among officials and scientists who impose schemes and knowledge upon them. I’ve heard a farmer saying, “we do not know whose agriculture we are doing”!

All these create situations which mainly small and marginal farmers confront all through their life. Even a cursory look at the whole policy canvas reveals inconsistencies, irrelevance, inappropriateness and contradictory results. Rather than launching myriad

schemes that farmers fail to navigate, it will be more worthwhile to go to the farmers, ask them what they want, and try to provide only that which should be at their reach. Instead of designing and imposing schemes, often of short-term nature, the problems need to be addressed at the community level as well as at an individual level looking at actual needs. It needs a complete paradigm shift in the thinking of policy makers, scientists, and extension bodies. Farmers’ needs and farmers’ knowledge must be placed at the centre stage instead of the current patch work that fails to have much positive impact.

[From the paper presented at the meeting, “Beyond Productivity and Populism: Reimagining Rural and Agrarian Policies”, IIT Delhi, September 26th to 28th, 2019].

India has sacrificed agriculture on the altar of GDP 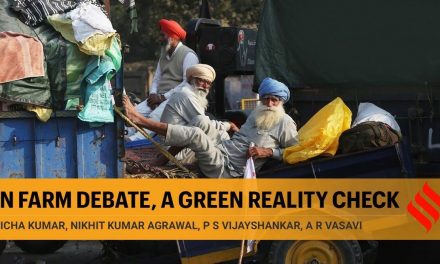