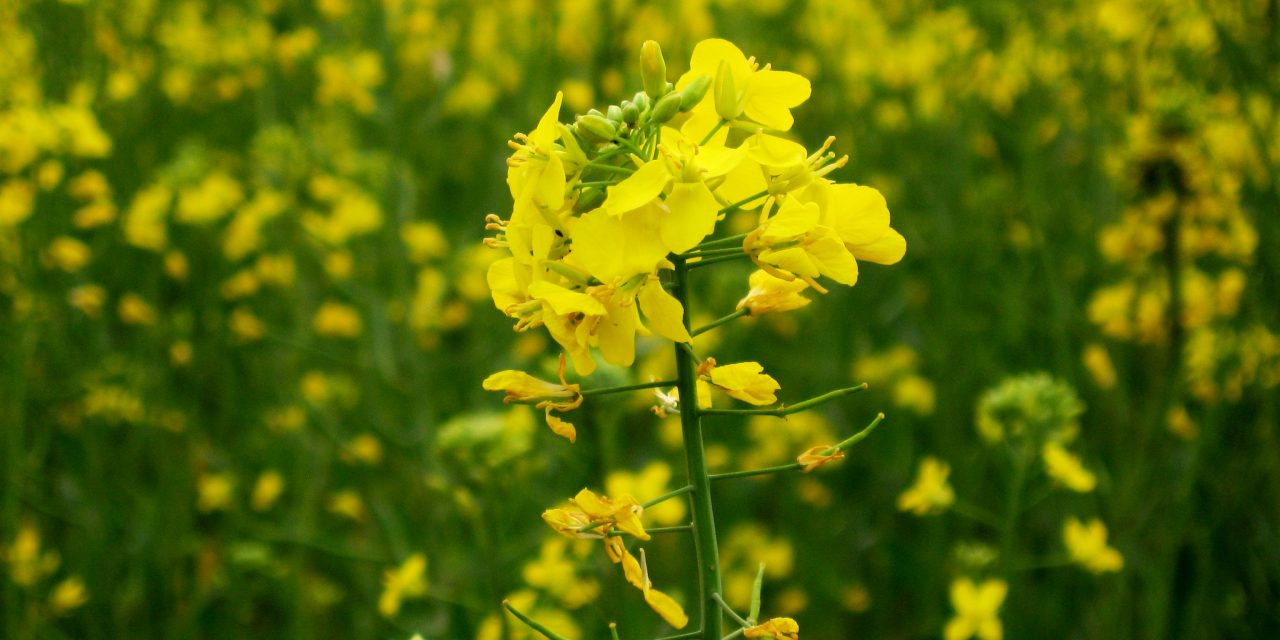 The Genetic Engineering Appraisal Committee (GEAC)’s recommendation and the subsequent Government of India’s decision to permit field trials of genetically modified (GM) mustard requires that we assess and understand the implications of this decision—not only from the narrow perspective of agricultural yields but from the broader interlinkages affecting agricultural production paradigms, human and animal health, food security and nutrition, livelihoods, farmers’ rights, and ecological sustainability.

As members of the Network of Rural and Agrarian Studies (NRAS), a global network of scholars, farmers, activists, practitioners, and students of Indian agriculture, we believe that the decision to allow trials for GM mustard cannot be the purview of agricultural scientists alone. Their knowledge and expertise are inadequate to provide a holistic evaluation of this technology and assess its implications for society. Several other forms of expertise from the natural and social sciences, including medical professionals, nutritionists, ecologists, climate scientists, economists, ethicists and sociologists, and expertise in areas allied to agriculture including bee-keeping, livestock rearing, and pastoralism, lay knowledge from consumer groups, and most importantly, the experiential knowledge of farm workers and farmers (especially women) must be brought into the discussion as evidence before a final decision may be taken.

Over 88 percent of the area under GM crops in the world is under Bt (bacillus thuringiensis), Ht (herbicide tolerance), or BtHt crops, which either claim to provide pest resistance or require the use of weedicides (Aga 2022). They have been promoted as monopolistic products directly by corporations, and facilitated the intensification of monoculture farming and its attendant ill-effects around the world, including India, as seen in the case of Bt cotton (Kranthi and Stone 2020).

In contrast to this corporatised promotion of GMOs in food and farm systems, GM mustard has been promoted by scientists from the University of Delhi, headed by Prof Deepak Pental, with a claim for indigenising biotechnology in the service of the nation and making biotechnology-based products affordable to farmers. Before we can evaluate this claim, it is important to note the technical differences between earlier GM crops and GM mustard.

Unlike Bt or Ht crops, where the genetic modification alters the very nature of the plant to produce a toxin or be resistant to the application of a chemical, the genetic modification in mustard supposedly enables an open-pollinated crop to be hybridised. Male sterility genes from a bacterium have been added to one open-pollinated variety of mustard and genes for restoring fertility have been added to another variety. These two varieties have been crossed (hybridised) using conventional breeding to produce a hybrid seed variety that is expected to yield more than traditional open-pollinated varieties of mustard.

Further, weedicide tolerance (the Ht trait) has also been added to both sets of varieties, to enable the process of identifying the seeds in which the requisite genes for stopping and restoring fertility have been successfully incorporated. So, although the Ht trait is a side-effect of the process of enabling successful hybridisation, it has made it possible for farmers to use weedicides from the company, Bayer, along with the crop and dispense with manual labour for weeding, as this is a major cost (and headache) for farmers.

Input-intensive technologies like GM mustard are promoted on claims of enhancing productivity, increasing farm incomes, improving domestic availability of oilseeds, and decreasing India’s massive edible oil import bill. However, these claimed solutions are like a temporary band-aid that, in the best-case scenario, stave off the crisis for another season but produce complex economic, ecological, climatic, health, and social problems over the years (Kumar 2016).

While it is true that India is importing over 60 percent of its edible oil requirements, it is not clear whether one can attribute this to a problem of yield deficiency of our existing oilseed crops (Reddy 2009, Persaud 2019). During the colonial period, India was not only self-sufficient in oilseeds but also exporting them, especially groundnut (Talawar 2004). After independence, oilseed production increased but with the coming of the ‘Green Revolution’, farmers were incentivised to grow wheat, rice, and sugarcane and they shifted away from oilseeds, pulses and millets. Even in the drylands, where the bulk of oilseed production takes place, the advent of irrigation led to changes in cropping patterns towards cereals (Kumar 2019).

However, instead of providing more incentives to oilseed farmers, the government has been subsidising, through tax breaks and land acquisition, the creation of edible oil refining facilities at ports for importing crude edible oil, processing it, and selling it domestically. The encouragement and support given to cheap edible oil imports of palm and soyabean oil from Indonesia, Malaysia, and Argentina have led to their flooding the Indian market from 1994 onwards (Sekhar 2004, Dorin and Landy 2009). This has strengthened the trend towards a market for a homogenised, blended, refined edible oil from ‘nowhere’ and has gutted the market for domestic farmers (Dorin 1999).

Coconut, sesame, groundnut and mustard have all seen sharp declines in their fortunes because farmers have found it unremunerative to grow them in comparison to crops like rice, wheat and sugarcane that have been supported through input subsidies and purchased under minimum support prices by the government (the price of these three crops has not fluctuated radically the way oilseed prices have) (Dorin 2004, Shah et al. 2021). The fact that wealthy and informed citizens are now switching to cold-pressed, organic edible oils while the masses are being sold poor quality imported oils is a trend that encapsulates the dangers of the edible oil lobby and industry (Kumar 2022).

Instead of addressing these market-centred shackles on oilseed production, the Indian scientific community, supported by the government, has continued to push for productivist measures to increase yields. On the question of yields, there is already controversy on whether the yield of GM mustard is significantly more than the best mustard hybrid and open-pollinated varieties that exist today (NAAS 2017). Moreover, owing to differences in cropping patterns (double or triple-cropped fields vis-à-vis single cropped fields), comparisons across farms across geographies do not present a correct picture of productivity. Not to mention, simply increasing yields may not ultimately benefit farmers as, sadly, higher output has often coincided with falling or stagnant prices, leaving farmers worse off (Swaminathan 2006).1

In the case of GM mustard, organic farmers and AYUSH health practitioners have raised concerns about biodiversity contamination and loss of markets. The possibility of using glufosinate as a weedicide with GM mustard (even if weedicide tolerance is not a trait primarily bred into GM mustard and only there as a residual marker) raises even greater health concerns given that weedicides like glyphosate have been labelled carcinogenic by the World Health Organisation (Guyton et al. 2015). This will also increase dependence of farmers on MNCs like Bayer who make these weedicides. Scientists from NAAS recognise this problem but have not offered any solution other than asking the government to disallow farmers from using weedicides in conjunction with GM mustard—an ironical situation given that GM technologies promote the monoculture paradigm that creates weeds and the necessity of weedicides in the first place.

Moreover, mustard seeds and mustard leaves (sarson ka saag) are also consumed in India; hence, mustard cannot be considered an oilseed alone and scientific studies on GM canola or cottonseed oil from Bt cotton are inadequate. Scientific studies on the implication of consuming other parts of the GM mustard plant must be conducted over the longer term to understand their health implications in humans and animals.

Finally, even if the current version of GM mustard has been created by Indian scientists using public funding, it uses the bar-barnase-barstar technology whose patent is still held by Bayer / Paul Scherrer Institute (expiry 2026). It is not clear, what, if any, royalty would need to be paid for the same and how that would affect the pricing of GM mustard seeds.

In light of all these concerns, we would like to call upon the government and the courts to enable a wider process of evidence gathering and public consultation across the entire mustard growing belt in India that can guide us towards an informed decision on the environmental release of GM mustard. These public consultations must be held in district headquarters (and not only in Metro or Tier I cities) to enable effective participation by oilseed farmers, farm workers, consumers, natural and social scientists, medical professionals, civil society organisations, and all other relevant stakeholders so that their expertise and experiential knowledge is also brought to the table for consideration. A moratorium on the environmental release of GM mustard must be put into place until such consultations take place.

Given the climate crisis that is bearing down upon us, and the crisis of livelihoods and health, which COVID-19 has left us with, has only deepened, it is imperative that we evaluate any new technologies in a holistic manner and assess their implications for society using a wider evaluative framework. The very ethos of our democracy is at stake and we must ensure that we uphold its principles and its practice.

1 The MS Swaminathan Committee Report highlighted this paradox and called for a shift in emphasis from productivity to income – the doubling farmers’ income policy of the government drew upon this insight.

Dorin, Bruno and Frederic Landy. 2009. Agriculture and food in India. A half-century review, from independence to globalization. New Delhi: Manohar.

Kumar, Richa. 2022. “From Self-Reliance to Deepening Distress: The Ambivalence of the Yellow Revolution in India.” In The Age of Soybeans: An Environmental History of the Soyacene During the Great Acceleration, edited by Claiton Marcio da Silva, Claudio de Majo and Adrian Zarrilli, 291-311. Cambridgeshire: White Horse Press. 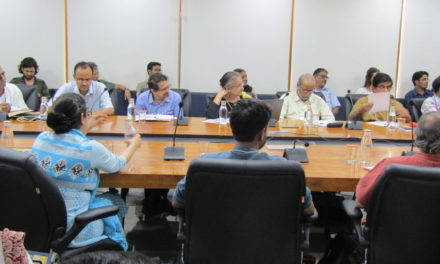 Source of the rivers, scams of the rulers 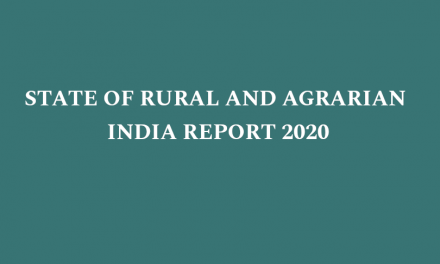